Megalithic stone monuments are spread all over Europe, with a high concentration in Ireland and the UK. Although there are many theories as to who built them and why, and though archeologists have made many enticing discoveries which help explain when these monuments might have been built, along with their purposes, no-one really knows.

Since seeing his first photographs of Stonehenge as a young boy living in northern California, Patrick has been fascinated by the standing stones of Europe. His first actual experience of walking among the stones did not occur until 1986, when he was in his mid 30’s. Over the following years he continued to make return trips and his passion for them, and his desire to understand them, grew stronger with each visit.

In 2009 Patrick decided it was time to try to really get close and personal with the stones, to find out what he could about them, as well as from them. So, he planned and undertook the first of what he called his “Stone Journeys.” Over the next nine years he searched out and found over 150 different stone sites in six different countries, many of which he returned to on numerous occasions.

Throughout his travels he kept journals about his experiences and took photographs of the many stone sites he visited. This information and these images were then gathered together to create, Stone Journals. It was Patrick’s intent to involve the reader as much as possible and as you read the book you too become a participant in the journeys. 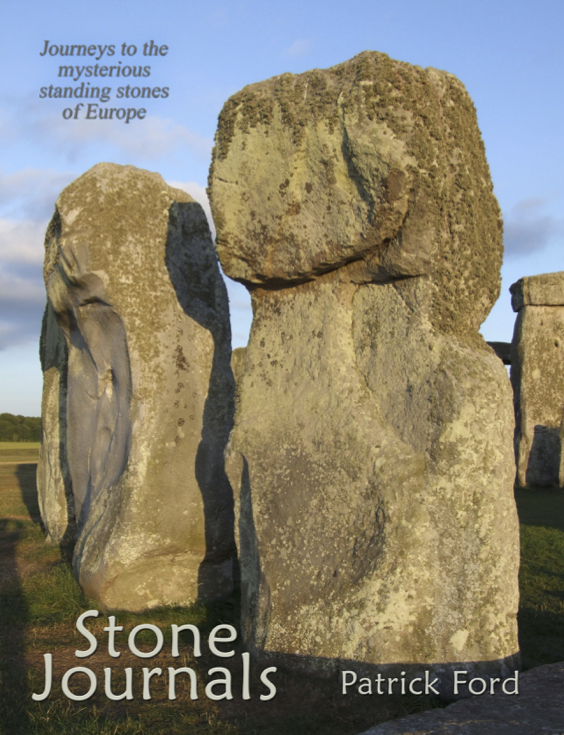 The reader may find themselves walking among the imposing stones at Callanish on the Isle of Lewis, or being blown about in a storm on Dartmoor in a fruitless search for the Scorhill Stone Circle. You may climb to the top of Knocknarea to Maebe’s Tomb in Ireland, or just sit on a massive fallen circle stone, staring up at the white clouds forming patterns over Long Meg and Her Daughters Stone Circle in Cumbria, England.

Along the way Patrick challenges the “rational mind” to open to possibilities they might not normally accept. Whether he is talking with locals, dowsing for energy lines, or conversing with a stone, the joy of this book is in the journey. And, as Patrick says, “There is much to be learned in the company of stones.”